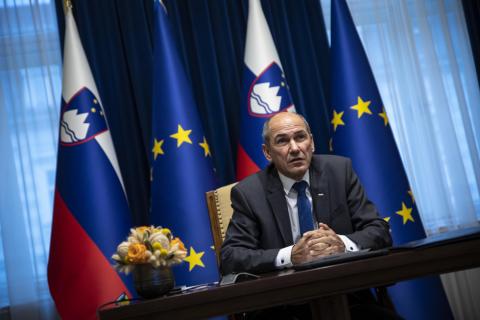 Ljubljana – The centre-left opposition condemned on Friday PM Janez Janša’s response to the visit of a fact-finding mission of the European Parliament, in particular his tweets. These were labelled as harmful and detrimental to Slovenia’s international image. Matej Tonin, the head of the junior coalition New Slovenia (NSi), urged Janša to apologise.

In one of the tweets, which has since been deleted, Janša posted an image with the heading “13 of the 226 known Soros puppets in the EU parliament,” referring to the MEPs as puppets of Jewish Hungarian-born American billionaire George Soros.

One of the MEPs in the image was Sophie in ‘t Veld (Renew), who is currently on the fact-finding mission in Slovenia with the committee on civil liberties examining Slovenia’s compliance with rule of law and media freedom covenants.

He said that this came after the SAB had helped the SMC join the European Parliament group, and that Thursday’s “attack on all leadership structures of ALDE, including the late president of ALDE Hans van Baalen” was the last straw.

Pavlič also noted that the latest developments came after many other problematic moves in the last year and a half, including the “destruction of the Slovenian Press Agency (STA) and the non-appointment of European delegated prosecutors”.

He added that the SMC’s “values, work, firm support for the current extreme-right government, non-response, failure to distance itself from the statements made by the prime minister are something the SAB cannot stand and watch any more”.

While the things are being escalated, this is not the sole fault of the ruling Democrats (SDS) and its leader Janez Janša, but also of the junior coalition SMC and New Slovenia (NSi) and all coalition supporters in parliament, Pavlič said.

SMC leader and Economy Minister Zdravko Počivalšek commented on Twitter about Janša’s tweets, saying: “I simply don’t understand certain statements, I see no need for them, I don’t support them and they seem harmful to our country’s reputation.”

However, the SAB believes that Počivalšek should call on Janša to apologise for the tweets. “We expect that they either distance themselves from that and apologise or exit the government,” Pavlič said about the SMC.

Brane Golubović, an MP of the Marjan Šarec List (LMŠ), said he was feeling uncomfortable over the prime minister’s “destroying the public reputation of Slovenia that has been built for 30 years”.

He added in a press statement that if the coalition partners, supporters of the government in the opposition and President Borut Pahor failed to realise that the prime minister was trying to gain absolute power, “then they are doomed”.

Golubović protested over President Pahor’s lack of response to this. “His moral obligation is to speak out in such cases, when our prime minister insults the prime minister of a fellow EU member state and MEPs.”

He also criticised the MPs who wanted to “finish the term at any cost” and the NSi for making “excuses as if they have nothing to do with it”, noting that its ministers were members of the government and thus collectively responsible for Janša’s tweets.

Golubović announced that the four centre-left opposition parties would sit down to talk and see “how to salvage this captured country again and bring it back on the track of democratic processes”.

Later, NSi leader Matej Tonin described Janša’s tweet as “inappropriate and unnecessary” and urged Janša to apologise for his statements. “If we want to preserve the EU, the bloc should be based on mutual respect and culture of dialogue. It would be a shame to waste Slovenia’s reputation in such a way,” he added.

Tonin noted that “a successful Slovenian EU presidency is entering its final stage and a challenging playoff is in store”, so the government should be building alliances and respectful relations with countries and institutions. “Recent events are moving us away from this, which is not good for Slovenia’s foreign policy situation,” he said.

Matjaž Han, the head of the deputy group of the opposition Social Democrats (SD), said that the party was not considering trying to oust Janša over tweeting as “an individual deserves this for other things” while “tweets only show that a person has issues”.

He added that Janša’s tweets were detrimental for Slovenia. “This is Ripley’s Believe It or Not! material and is unacceptable,” he said, condemning these “values, degrading and cynicism”.

Luka Mesec, the leader of the Left, said that with his tweets about MEPs, Janša had “confirmed the suspicion we have had about his manner of ruling, trampling on the rule of law and undermining free media space and open society”.

He added that “after yesterday’s fiasco, we can conclude that the Slovenian EU presidency is over” and that entire Slovenia could see once again “who that man is and what he is doing with the country’s reputation”.

Mesec said that the coalition partners should not overlook this, adding they should stop supporting Janša, exit the coalition and enable an early election.

Responding indirectly to the developments, President Borut Pahor said he was a firm believer that “every opinion can be expressed in a polite, tolerant and respectful manner”.

“I am therefore concerned that, in contrast, the impression is deepening that the only way to be heard today is to address the public with statements that are impolite or even intolerant,” he wrote in a press statement.

He added that “this dangerous temptation” should be first and foremost resisted by the top state representatives, because their views can also be seen as the views of the state.

“In the thirty years of its independence, Slovenia has earned a reputation in Europe and the world as a respectable, constructive and non-argumentative country. All of us who represent it must do our best not to undermine but to strengthen this reputation,” the president said.