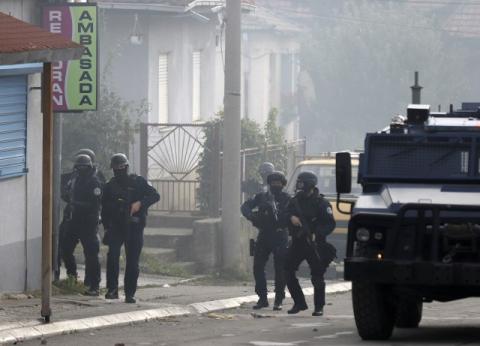 Namely, according to the media, that group sends exclusively reports to its headquarters, which are negatively intoned towards Serbs and the north of Kosovo. Such intelligence is also used as a cover for approving the actions of the Prime Minister of self-proclaimed Kosovo, Albin Kurti, through special units in the north of Kosovo. Those actions - which often develop into a brutal attack on the Serb community in the north, such as the last one on Wednesday - are carried out according to a certain "algorithm" and so far, none have been carried out without following every step of the algorithm before crossing the Ibar bridge", Blic states.
Head of the Kosovo Police first informs the competent minister about the "need" for the use of special units and operations in the north. Minister then informs the Prime Minister of Pristina, and here we come to the key moment. The Prime Minister is obliged to inform the Quint countries (France, Germany, Italy, the United Kingdom and the United States) about the plan in advance, before the action took place.
"Blic" wrote about the part of the intelligence mosaic in Kosovo and Metohija, how some intelligence groups behave, what they write in reports on Serbian communities and whose support the Prime Minister can count on to carry out actions of Kosovo's PM, Albin Kurti.
This paper states that their interlocutor is a KFOR officer from one of the countries of the European Union, which, after arriving in Kosovo, developed good relations in the areas where there was a return of Serbs.

Negative reports regarding the north of Kosovo and Metohija Foto: Tanjug/AP Photo/Bojan Slavkovic

The interlocutor points out that in the last two years, two groups of four intelligence officers who are British citizens...