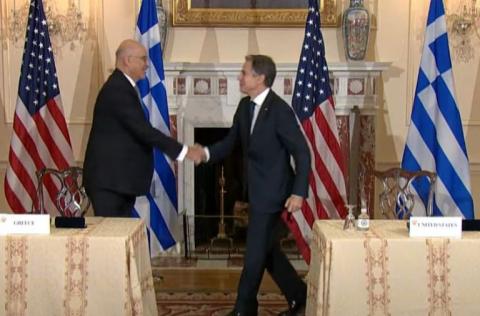 Though public attention over the last days in Athens focused on yesterday's signing of the bilateral, revised US-Greece Mutual Defence Cooperation Agreement (MDCA), which is as US Secretary of State Anthony Blinken stated the "bedrock" of the two countries' defence cooperation, less attention was paid to the importance of the latest round of the US-Greece Strategic Dialogue that was held in Washington the same day.

The strategic dialogue was launched with much fanfare in Washington in December, 2018, by then US Secretary of State Mike Pompeo and Greek Foreign Minister Yorgos Katrougalos, when SYRIZA was in power.

"The Strategic Dialogue builds on a year of intensive engagement, highlights the strength of the bilateral relationship, and confirms the mutual commitment of the United States and Greece to deepen cooperation," the two sides said in a joint statement at the time.

Beyond defence issues, the dialogue became the foundation of an official, exceptionally broad and deep cooperation between the two countries. It was rightly seen as the take-off of a vastly expanded relationship based on mutual interests on the bilateral, regional, and international level - including the two countries' strategic cooperation with Israel - and it was hailed as such at the time.

The second round was held in October, 2019, after the current New Democracy government.

Third round of dialogue

Yesterday's third round came at a time that Turkey has drastically escalated it provocations against Greece both in the Eastern Mediterranean, and it became perfectly clear in remarks at yesterday's signing of the revised MDCA and then in the joint statement on the strategic dialogue that Athens looks to Washington as a strategic partner in its...