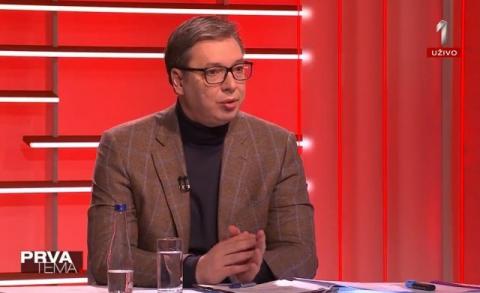 At the beginning of the interview, Vui commented on the arrest of Dijana Hrkalovi.
"This is evidence in the possession of the competent state authorities, related to the murder of Mr. Milosevic. After that, I assume that the DNA was changed, and that some people were released instead of being convicted. I assume that is one of the reasons," he said.
"We know who carried out the liquidation of Mr. Milosevic, I have already talked about that, but I would not like to put pressure on the competent authorities. In that case, the police have solid and unequivocal evidence," he said.
"What is important is that we have not had a mafia murder in Serbia for nine months," said Vucic. "I'm pleased with how we managed to cut off the head of the criminal octopus."
"Whatever is done, I am always guilty of something. They have been saying for months that I dare not arrest Dijana Hrkalovi, I don't know why... As you can see, this country has its own mechanisms. Immediately after she was arrested, they changed are the story", he said.
"There will be more arrests in the coming days... Both of the killers and their allies," Vucic announced.

No one will be protected

Regarding the murders of journalists, Vui said - "The case of the murder of uruvija is coming to an end, which was not done in the 12 years of the previous government... We will see that the murder of Mr. Panti be resolved as well."
"It must be known that no one in the country can kill anyone, not pay for it. That is why the state exists. And the most important message, there are no protected people, no functions, no names and surnames, if you have committed crimes - you will be arrested, President of Serbia said. Someone from the police finally spoke about it, said the...