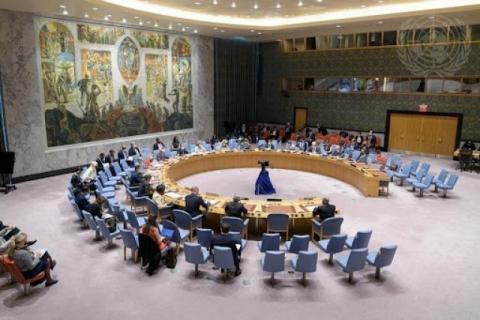 "We call on Serbia to respect international conventions," Vjosa Osmani said.
She said at the session of the UN Security Council that it was time to "end" the United Nations mission in Kosovo and Metohija, and called on the international community to "accept" the so-called Kosovo into international organizations. When it comes to the Community of Serbian Municipalities, which was not formed, Vjosa Osmani tried to find an excuse in the fact that the Pristina Constitutional Court determined that the Brussels Agreement was in conflict with the Constitution.
When it comes to the recent actions of the Kosovo Police, Vjosa Osmani said that the fight against organized crime is not the subject of negotiations. The president of the interim institutions in Pristina, Vjosa Osmani, and members of her team appeared with the symbols of the so-called Kosovo at today's session of the United Nations Security Council on the situation in Kosovo and Metohija.
Vjosa Osmani hung a badge with the so-called Kosovo, while one of the members of her team put on a black mask with the flag of Kosovo.
The Serbian delegation at the UN Security Council session is led by Foreign Minister Nikola Selakovic.

The Mission of Serbia to the UN lodged a protest against the symbols of the so-called Kosovo on the masks of the President of the Provisional Institutions of Pristina, Vjosa Osmani, and members of the Pristina delegation.

Serbia is committed to keeping the work of the United Nations Mission in...