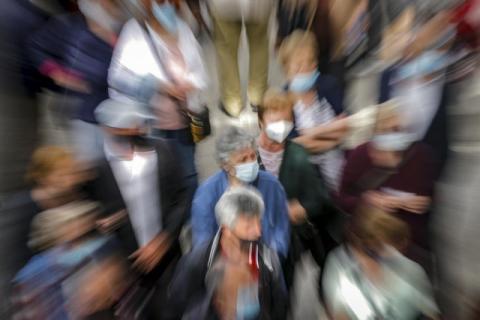 "Perhaps we should consider the introduction of paying for medical services or punishing those who oppose vaccination", medical professionals in the field of epidemiology, virusology and microbiology stated, with an idea to vaccinate majority of population and thus preventing the virus to mutate in new strains. Antivaxxers are given too much space and times for their propaganda and that is why we have a low percentage of vaccinated citizens, experts agree.
The director of the Health Center in Novi Sad, Dr Veselin Bojat says that there are citizens that want to do something for their good and be vaccinated and the antivaxxers are actually throwing us back to prehistory against this wicked disease although we have the most modern weapons.
September was the worst month after December last year in number of patients who have registered in our respiratory center, it just says that we missed something or we haven't done something well", says Dr Bojat.
He noted that the state did everything that was supposed to do and that the vaccines were provided, so that what we need to do was get vaccinated.
The doctor emphasized that there is an antivaxxer's lobby in Serbia who wants to fight the virus bare-handed.
He hinted that the new contingent of the Russian vaccine Sputnik V will arrive to Serbia in two weeks.
The director of COVID Hospital in Novi Sad, Dr abarkapa pointed out that the situation in the hospital is worrying that more than five hundred patients are housed and that almost 90 percent of them are not vaccinated. He told citizens to be responsible and to protect themselves and others.
"I have to point out that the situation is very worrying, that health workers are quite tired, but they still struggle to win this disease,"...