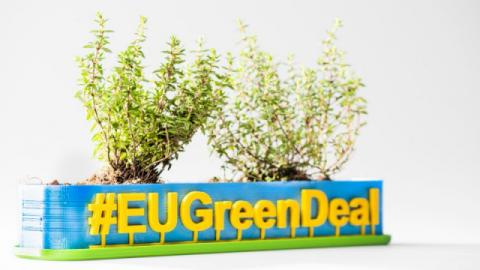 A poll shows that 80 percent of people in Bulgaria do not know the Bulgarian position on the so-called "Green Deal".

Under this name are known the new climate goals of the European Union, which provide for the economy to gradually become independent of coal as an energy source.

Young people and people with higher education are the most supportive of climate protection policies, according to a study conducted by the Trend Research Center.

68 percent of respondents identify climate change as a real threat, and according to 62 percent the fight against it should be a priority for the European Union, which shows that we have no lasting skepticism about the green transition, said Dimitar Ganev of the Research Center "Trend":

"2/3 of Bulgarians are ready to dispose of less waste, less use of plastic, even to do something in their daily lives in a green direction."

Despite the lack of green skepticism, the data show that the majority is not aware of the goals of the "green deal" and the plan for decarbonisation of the European Union, said Dimitar Ganev:

An important aspect of the survey is the reported 48 percent of respondents who do not know what effect the "Green Deal" would have on life in Bulgaria, which according to Dimitar Ganev is a real field for manipulating information:

"This is a breeding ground for all political interests when there is no information on an issue."

The Trend study takes into account the main concerns of the people from the "Green Deal", namely fear of financial consequences, closure of businesses, loss or...