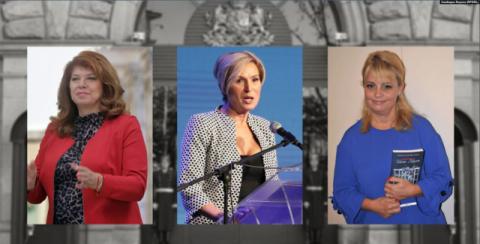 No matter how the presidential election ends, the next Bulgarian vice president will be a woman again.

By comparison, there were only two female vice presidential candidates in 2016.

But why are women always second? They come to power, but still remain one step behind the men.

"It would be very nice if many more female presidential candidates run in the next elections," Maria Kasimova-Moase told Free Europe. She is running for vice president of the country together with Lozan Panov. The couple is supported by Democratic Bulgaria.

"Somehow we are still perceived as first ladies, "the woman next to", "the woman in the shadow of", and it is good to show the girls who grow up after us that a woman can have as good qualities a male candidate has" she added.

Kasimova-Moase is known as a journalist and writer with no experience in politics, but since she accepted Panov's cause, she decided to respond to the invitation to stand by him.

DPS, which announced its candidacies at the latest, also envisions a woman for the vice-presidential post, Iskra Mihaylova.

"I have a lot of faith in a woman as someone who can pave the way, be a diplomat, a person who has a vision, who always takes care of others, and I am absolutely convinced that each of these women who are...