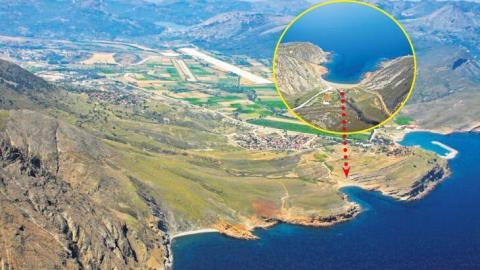 Islanders strongly react to a decision that paves the way for construction at Yıldızkoy [Star Bay], a secluded bay area located within the boundaries of the National Underwater Park in Turkey's largest Gökçeada (Imbros) island.

The "Balıkesir-Çanakkale Landscaping Plan" ratified in the municipal council on Oct. 4 allows building settlements on the bay.

"It will be a severe mistake to open the bay for building settlements," geological engineer Doğan Perinçek told daily Milliyet.

Being a haven to endangered Mediterranean monk seals and many endemic species, Yıldızkoy is considered "one of the richest bays for biodiversity."

"The plan will break the bond between islanders and the sea after it will enter into force," said Alev Karayel, the manager of the Gökçeada Volunteers Society.

"We are talking about a land of 288 decares. Think about settlements on it. They will harm the environment," she said while promising not to remain silent to selfish interests propagating on the natural wonder of the island.

Perinçek also remarked on the danger of increasing an earthquake risk on the island once settlements start to flourish in Yıldızkoy. "The soil of the island is rising with floor exercises. A plan of settlement is considered at a time of a quake risk," he noted.

The surprising thing is that Ünal Çetin, the mayor of the island who faces harsh criticisms from islanders, said the decision was taken by the previous administration.

"The plan was announced by the Environment Ministry in 2015. But the knives are out for the municipality," he told the daily.

Local opposition representatives call the plan "betrayal to nature," while islanders make a pun on the name of the bay, saying, "Yıldızkoy will be a falling...