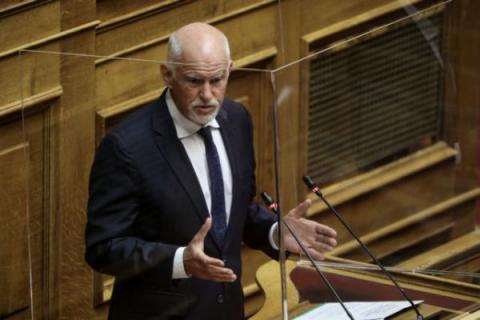 The withdrawal of Movement for Change leader Fofi Gennimata from the party's leadership race has triggered a chain reaction with three new candidates - Vasilis Kegeroglou,  Pavlos Geroulanos, and Pavlos Christidis - throwing their hat in the ring, and now with reports over the last hours indicating that former prime minister George Papandreou is ready to step in to play a unifying role in the party.

He has reportedly been greatly pressured by key party cadres to enter the race and some say that he may be mulling the prospect of doing so under the right circumstances, possibly with an a priori groundswell of support from party cadres and the base.

The former PM, who is the son of the late Pasok founder and prime minister Andreas Papandreou, has by far the broadest and deepest influence among centre-left voters in the base of the party - which was renamed Movement for Change after Pasok suffered a crushing defeat in the 2015 general elections.

The party that in its halcyon days in 1981, when Andreas swept to power, garnered 48 percent of the popular vote, in 2015 got less than five percent.

Papandreou's popularity among traditional Pasok voters was made perfectly clear when George Papandreou decided in 2004 that for the first time ever Pasok's leader would be elected by members and friends of the party.

Papandreou was the sole candidate and received slightly over one million votes.

In the eyes of older party loyalists, Pasok has always been completely identified with the name Papandreou.

"Former Prime Minister George Papandreou, in an effort to...