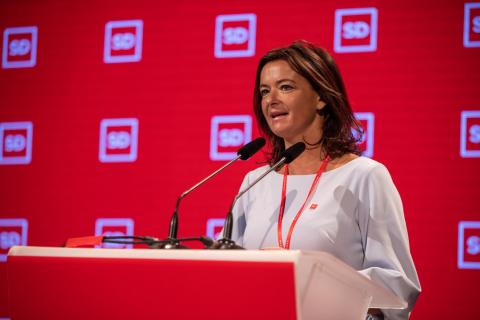 Ljubljana – The opposition Social Democrats (SD) set out their election manifesto on Saturday with the promise of a new beginning and major changes over the next decade, including higher pay and shorter work week. In her address to the party conference, SD leader Tanja Fajon described the programme as a development-oriented vision.

“Slovenia is speeding into a completely wrong direction today, a direction most people don’t support, which is being reflected in protests on the streets, calls for resignations and a snap election,” Fajon said, adding: “Neither a water cannon nor tear gas or cynicism can wash away the desire for change.”

With the adoption of the draft manifesto, dubbed a “programme of great changes for the development decade until 2030”, a broad public debate will begin where the partly will tour the country to talk the proposals through with experts, civil society, trade unions and businesses in the coming months before the final version is adopted by the party conference in early 2022.

The party is planning ten major changes to improve people’s lives, the quality of public services, business, governance and democracy, with a quality public healthcare and increasing the value added of the economy for higher pay being described as top priorities.

Fajon spoke of great challenges ahead and the urgency of “dealing with health, economic, social, climate, environmental, technological, political and security risks, to restore safety, prosperity and success in Slovenia”.

The proposals as set by Fajon include measures to boost value added of the economy, raising the minimum wage to at least EUR 800 gross and gradually reducing working time to 32 hours a week, while raising the minimum pension to EUR 700 net, proposals that she said were based on financial calculations.

Fajon also spoke of the need to secure social security for all, the young, families, workers and the elderly, a safe and just transition to climate neutrality and the rule of law and democracy.

She said public healthcare must be enhanced so that all citizens regardless of their situation should have access to equal and quality services and treatment. Th party is thus proposing a 30-day time frame for specialist examinations, higher pay for nurses and special care for youth mental health.

“It’s because only healthy people can work and create. We want an economy and work tailored to people,” said Fajon. “We want to root out precarious work as a major exploiter of mostly young people with a single employment contract. Flexibility shouldn’t pay, flexibility should be paid,” she added.

To prevent energy poverty due to rinsing prices, the party suggests capping energy prices. “I don’t trust the market to protect people. We have a state which must protect people,” said Fajon.

Touching on topical political issues, the SD leader said the authoritarian style of rule and the belittling rhetoric of PM Janez Janša had led to Slovenia loosing political allies in Europe as well. The SD “will not be silenced by his intolerant and chaotic rule”.

“We will respond to autocracy with more democracy, to repression by defending freedom and to injustice by boosting human rights,” she promised, adding that voice must be raised against lies, theft, spread of hatred, violence and threats against women, minorities, gays, refugees, children and vulnerable people.

Talking to reporters after the conference, Fajon said the party was ready for the general election platform-wise, while they were also finalising candidate registry procedures. “Our advantage is that we still have a broad network on the ground.”

She said some of the proposals discussed today also included limiting the scope of doctors’ work in public and private sector at the same time, free kindergarten for all children, an overhaul of school curriculum, moving all heavy cargo transport to railway, and a properly funded long-term care.

Asked how the party’s platform could agree with the other centre-left opposition parties that the SD signed a post-election pact with, Fajon said they had many points in common. “All the points on the table then will be a matter of coalition talks,” she said.

The party did not feel they had competition in Slovenia. “These are not new points […] The demand for a higher minimum wage and pensions has been on the agenda in social democracy for several years, also at the European level. If someone thinks in a similar way it will be the easier to form a new government,” she said when challenged whether they competed with the Left with some of their proposals.

The post SocDems set out their election manifesto appeared first on Slovenia Times.