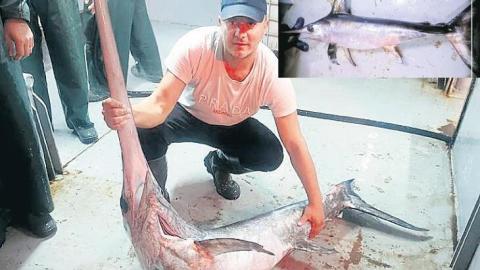 "I have been fishing in these waters for 45 years. This is the first time I have seen a swordfish in my fishing net," said İaban Şengül, the fisherman who caught the endangered species.

Swordfish were the mainstay of Istanbul's fishermen in the 1960s. Due to unplanned urbanization and marine pollution, swordfish "vanished from the waters of Istanbul Strait in 1970s.

"I can't say the exact date, but I guess we may say that the end of 1970 was the time swordfish started leaving the strait," said Tuğrul Zahit Alıçlı, a lecturer at the same faculty with Erkan.

"It is for sure that swordfish was never seen in the strait after the 80s," he added.

According to Alıçlı, the reason that swordfish came to the Istanbul Strait was the presence of "mackerel."

"Swordfish feed on mackerel. Probably it followed a school of mackerel and swam along the way from the Aegean Sea to the Marmara Sea," he highlighted.

When asked if people can think that swordfish are back in Istanbul Strait, Erkan said, "It is too early to say that. But it is good news that even one has come."

Meanwhile, fishermen took loads of photos and selfies with the fish caught off the Kireçburnu shore.