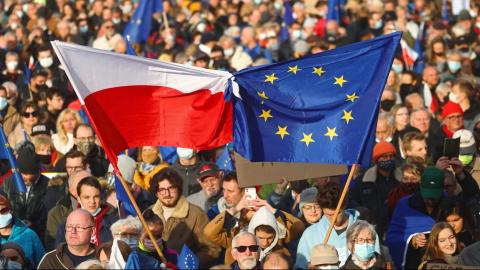 Like all 27 EU member states, Poland accepted the supremacy of EU Treaties when it joined back in 2004. Those basic tenets have not changed since. What did change, however, is that, of late, rulings handed down by the CJEU have begun interfering with the Polish government's takeover of the judiciary - a process which has been happening since 2015. Hence, the government's need to neutralise the authority of the CJEU in Poland.

What last week's ruling by the politicised constitutional court means is that Poland can now claim the right to pick and choose which parts of EU law it adheres to. Thus, currently, the government doesn't like the CJEU interfering with its 'reforms' of the judicial system, so the ruling means CJEU rulings in that area are incompatible with the Polish Constitution.

But is this position of the Polish government tenable? BIRN has analysed what could be the consequences of the Constitutional Tribunal's decision.

When does the ruling come into force?

The Polish government already published the Constitutional Tribunal ruling in the Official Gazette on October 12, which means it came into force on that day.

Does the ruling mean Poland is leaving the EU?

No, not unless the Polish government decides it wants this - and that's not on the cards for the foreseeable future. Opinion polls show that around 80 per cent of Poles want to stay in the EU and hundreds of thousands took to the streets across the country in protest against the ruling by the Constitutional Tribunal. Plus, there are tens of billions of euros set to come from the EU over the coming years that the government desperately needs to meet its promises to voters ahead of the next general election in 2023.