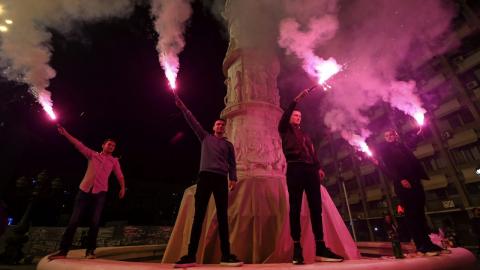 North Macedonia's main opposition VMRO DPMNE party declared victory over the centre-left government on Sunday night after polls closed in the local elections, which would mark a striking political comeback after three election defeats to the ruling Social Democrats.

According to the preliminary results from the Central Electoral Commission, DIK, which by Monday morning had counted the votes in 67 of the 81 municipalities, the right-wing VMRO DPMNE party had won 16 mayoral races in the first round, as opposed to nine for the Social Democrats.

Even more notably, the opposition will most likely have the advantage of several tens of thousands of votes overall against the Social Democrats, judging from still incomplete data.

The opposition also did surprisingly well in the election's "crown jewel", the capital, Skopje. There, after just over 80 per cent of the votes were counted, their candidate, Danela Arsovska, was in the lead with 37.20 per cent of the votes, against the Social Democrat incumbent, Petre Shilegov, who won 35.06 per cent.

This means both candidates will run in the second round, due in two weeks' time.

"This is not the end of the battle. The real battle is yet ahead of us," VMRO DPMNE party leader, Hristijan Mickoski told cheering supporters on Sunday night at his election HQ.

He was referring to his earlier announcement that, if they win the local elections, they will push to form a majority in parliament, or step up calls for early elections, which should regularly take place in 2024.

The government of Zoran Zaev currently has only the thinnest of majorities, with just 62 MPs in the 120-seat parliament.

The results, if confirmed, signal a serious political comeback for VMRO DPMNE, which has lost...