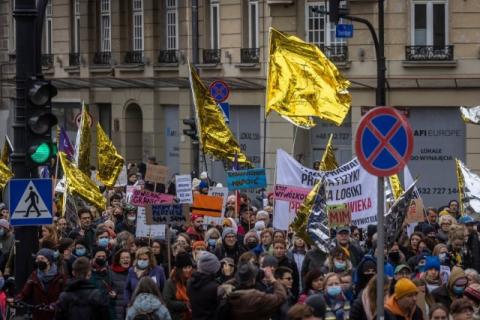 Several thousand people protested under the slogan "Stop torture at the border".
The protesters accused the Polish authorities of cruel behavior due to pushing migrants back and the introduction of a state of emergency at the border, which prevents human rights activists and humanitarian organizations from helping migrants.
"How many bodies are lying in the forest?" It was written on a banner in Warsaw, which refers to several deaths that occurred in the forests and swamps of the border area.

In the last two months, a large number of migrants, mostly from the Middle East and Africa, have been trying to enter Poland illegally from Belarus. Polish authorities have reacted sharply, accusing Belarus and Russia of encouraging migration to cause instability across the EU, calling it "hybrid warfare".
The participants in the march passed by the Polish parliament, which adopted a state of emergency and laws that allow arbitrary rejection of migrants' requests for asylum.
The UN refugee agency said the law "undermines the basic right to seek asylum under international and EU law."

🇵🇱 An protest is being held in Warsaw demanding that the Polish authorities provide asylum to migrants blocked at the border. Participants came out with slogans "Shame" and "No torture at the border". #Poland #Warsaw pic.twitter.com/7XeKmV5FSR