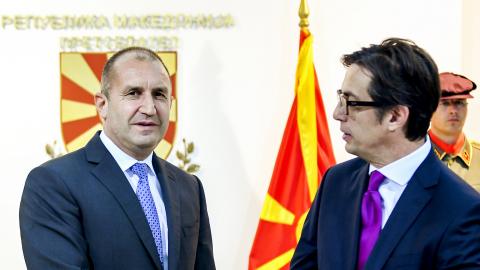 Tight deadline to put grievances aside

The first to speak of the six-point protocol as a basis for fresh talks was Bulgarian President Rumen Radev, during the October 6 EU-Western Balkans summit in Slovenia.

He said that Bulgaria had already handed the protocol to Skopje and that, if the October talks succeeded, the two foreign ministries would quickly sign an agreement binding Skopje to fulfilling them.

The six points are: the short and long form of North Macedonia's name; preventing hate speech; rehabilitating the victims of communism; greater engagement in the joint History Commission; non-interference in the other's domestic affairs; and naming Bulgarians in North Macedonia's Constitution.

Most of these topics sound like common topics between any two neighbouring countries. But the devil hides in the details, in this case, in deeply rooted historical grievances and radically different views about the past - which could make reaching a deal very hard.

Young people hold Bulgarian and North Macedonia's flags during the 2019 unveiling of the monument of Bulgarian Colonel Konstantin Kavarnaliev who died in bettle of Dojran, North Macedonia, during the second Balkan war in 1913. Photo: EPA-EFE/GEORGI LICOVSKI

Putting Bulgarians into the constitution

Seemingly, North Macedonia could easily please Bulgaria by naming ethnic Bulgarians in its constitution. Earlier this year, Bulgarians in the country urged Skopje to name them in the constitution, which already lists ethnic Albanians, Serbs, Bosniaks,...