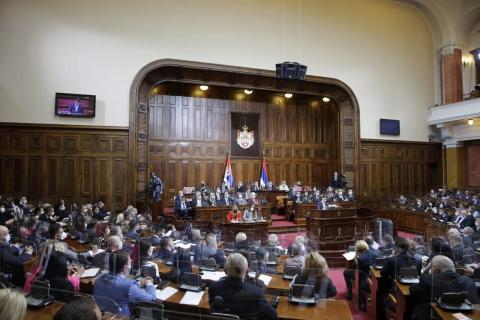 MPs in the Serbian parliament on Tuesday voted against debating three proposed resolutions related to the 1990s wars in the former Yugoslavia.

The first unsuccessful proposal, for a resolution to condemn the genocide of Bosniaks from Srebrenica, was put forward by six MPs from the United Valley-SDA Sandzak parliamentary group, which draws its support from the Muslim-majority Sandzak area of southern Serbia.

"The goal of the resolution on the genocide in Srebrenica is to strongly condemn it, but also to ban any denial of this genocide, the glorification of convicted war criminals and the announcement of new genocides against the Bosniak people," one of the MPs who proposed it, Enis Imamovic, told parliament.

Serbia does not recognise the Srebrenica massacres as genocide despite the verdicts of international courts.

Ruling Serbian Progressive Party MP Ana Karadzic, was one of the lawmakers who put forward the second unsuccessful proposal, for a resolution to set up a commission "to investigate and determine the number of victims of the NATO aggression in 1999". NATO bombed Yugoslavia to make President Slobodan Milosevic end his military repression of Kosovo Albanians.

Karadzic said that "we have a moral obligation and responsibility, but also responsibility as MPs, because here we can form a commission that will determine, by name and surname, the exact number of the dead, in other words those killed in the NATO aggression".

MP Miodrag Linta, from the governing coalition, put forward the third unsuccessful proposal for a parliamentary resolution related to the 1990s wars.

Linta suggested amendments to Law on War Veterans so that all members of the army and militia of the Republic of Serbian Krajina, a self-proclaimed...