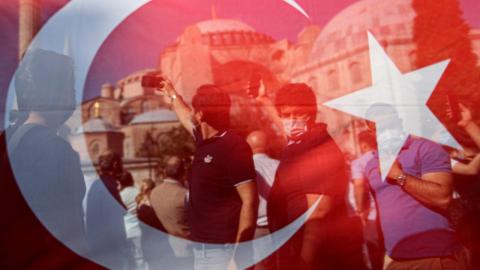 The ambassadors of the United States, Canada, France, Finland, Denmark, Germany, the Netherlands, New Zealand, Norway, and Sweden were arrived at the Turkish Foreign Ministry on Tuesday morning after issuing a joint statement calling for the release of philanthropist and human rights activist Osman Kavala.

"A group of ambassadors who released a joint statement last night in violation of diplomatic customs, regarding an ongoing legal case, have been summoned this morning to the ministry," the Turkish Foreign Ministry said in a statement.

"It was conveyed to the ambassadors/chargé d'affaires of these countries that the impertinent statement via social media about legal proceedings being conducted by an independent judiciary was unacceptable, that the statement attempting to politicise judicial proceedings and put pressure on Turkish judiciary has been rejected, and that the statement was also against the rule of law, democracy and independence of the judiciary that is allegedly being defended by the ambassadors," the ministry added.

The ten Western embassies sent a joint letter to the Turkish government on Monday calling for the immediate release of Kavala.

Kavala has been in prison for four years without a conviction and despite rulings by the European Court of Human Rights, ECHR stating that he should be released.

"Today marks four years since the ongoing detention of Osman Kavala began. The continuing delays in his trial, including by merging different cases and creating new ones after a previous acquittal, cast a shadow over respect for democracy, the rule of law and transparency in the Turkish judiciary system," said the Western embassies' joint statement.

It also said that the Turkish government must respect its ...