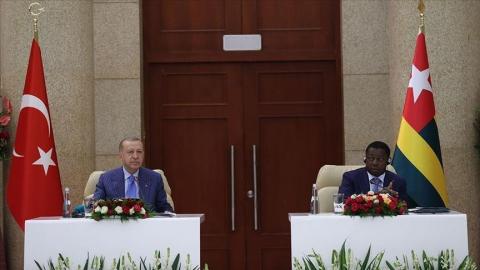 Turkey highly appreciates Togo's support in the fight against the FETÖ, the group behind the 2016 defeated coup in Turkey, President Recep Tayyip Erdoğan said on Oct. 19.

Speaking at a joint news conference with his Togolese counterpart Faure Gnassingbe in the capital Lome, Erdoğan said that steps can be taken in military security cooperation so that terrorism does not infiltrate the West African region.

"We will always continue to stand by Togo in this regard," he added.

"We want friendly countries to be cleansed of the scourge of FETÖ, I hope we will achieve this," Erdoğan stressed.

FETÖ and its U.S.-based leader Fetullah Gülen orchestrated the defeated coup of July 15, 2016, which left 251 people dead and 2,734 injured.

Erdoğan also underlined that Turkey and the Turkic Council will donate COVID-19 jabs to Togo, Burkina Faso, and Liberia as part of efforts in the fight against the pandemic.

The Turkic Council was established in 2009 as an intergovernmental organization with an overarching aim of promoting comprehensive cooperation among Turkic-speaking states. It consists of Azerbaijan, Kazakhstan, Kyrgyzstan, Turkey, and Uzbekistan as member countries and Hungary as an observer state.

The Turkish president started a four-day tour of three African countries, including Angola, Togo, and Nigeria, on Sunday.