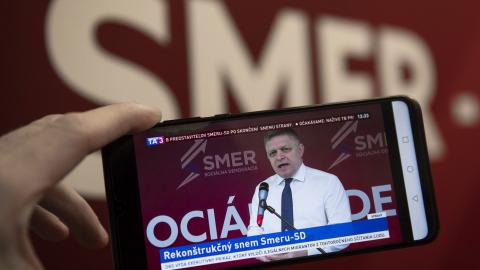 The popularity of Robert Fico, the former prime minister and chair of the social democratic Smer party who is currently an opposition MP, has received a boost lately. While only 19 per cent of voters trusted him in November 2020, that figure had risen to 29 per cent by September, according to a poll by Focus.

Fico is among the worst of the politicians who nurture what Radoslav Štefančík, a political analyst from the University of Economics in Bratislava, terms "pub talk".

By way of example, Fico wrote on Facebook in August that the political scientist Jozef Lenč, who has been critical about Smer in the past, should not be accepted as a political analyst in a "Christian country", because Lenč is Muslim and, as such, he only attacks Smer because the party is against migration quotas and against the emergence of Muslim communities in Slovakia.

Štefančík also singles out the deputy chair of Smer, Ľuboš Blaha, who uses exceptionally "radical" language in his public statements, as well as Boris Kollár, chair of the coalition party Sme Rodina. The far-right parties People's Party Our Slovakia (ĽSNS) and Republika, founded by LSNS defectors, are also "strongly represented" in this regard, according to the analyst.

Smer enjoys current support of 14.4 per cent, Republika 6.8 per cent, ĽSNS 4.6 per cent (below the threshold of 5 per cent to enter parliament) and Sme Rodina 6.7 per cent, based on the most recent poll conducted by Focus Agency between September 7 and 11. Counted together, they have the support of about a third of the Slovak electorate.

Typically, the language of extremists is not any more radical, because anything more extreme would risk prosecution and perhaps even a ban on...