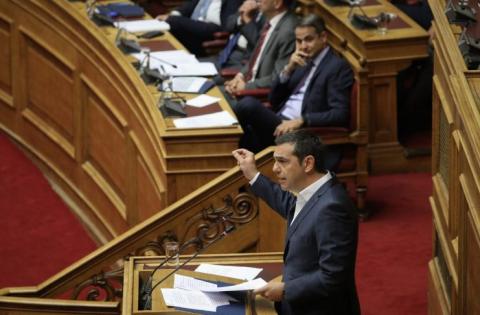 Before 2015, SYRIZA had a theory that the country was in the grip of a "sinful triangle", of a corrupt intertwining of the mass media, banks and the government. That, of course, was when SYRIZA was not in power.

The basic idea was not original. It had previously cropped up in Latin America, where various local "SYRIZAs" had hatched this brilliant theoretical concept.

In 2015, SYRIZA formed a government and the "sinful triangle" disappeared. The mass media were directly called upon to be subjugated or (at least) to align with the government in order to serve the "truth" and not corrupt vested interests.

Those who were not persuaded to repent were threatened with obliteration, along with the "sinful triangle".

That was in contrast to banks, which swiftly repented and did not have many qualms about helping the government for the sake of "truth" - especially after the recapitalisation of 2015 which triggered well-known results.

In 2019, SYRIZA was defeated and became the main opposition party. It is not clear who was to blame. Certainly, one person the main opposition blamed was [PM Kyriakos] Mitsotakis who "exploited the [102] dead" in the Mati wildfire, and also super-patriots, who opposed the Prespa Agreement on the naming of Northern Macedonia. Perhaps there were others, such as an "anti-SYRIZA front".

What is certain is that SYRIZA was not to blame. If I am not mistaken, those were the first elections in the world in which the loser bore no responsibility for defeat!

Since 2019, New Democracy has cemented its political predominance and SYRIZA has gradually grown weaker. That is recorded in every opinion poll and by any journalist who does his or her job properly.

It is patently obvious...