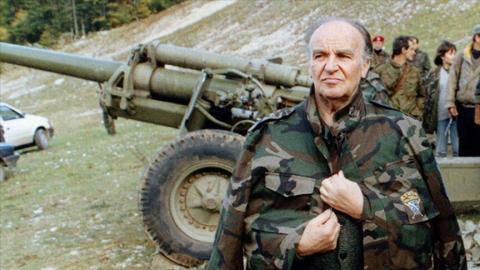 "I commemorate Alija Izetbegovic with respect and mercy on the 18th anniversary of his death, who is the first President of friendly and brotherly Bosnia and Herzegovina and devoted his life to the independence of his nation and the struggle for honor," Turkish Vice President Fuat Oktay said on Twitter.

"With mercy and respect on 18th anniversary of his death, I commemorate Alija Izetbegovic, who devoted his whole life to justice, freedom and faith," Şentop said.

"His honorable struggle will never be forgotten," he added.

Izetbegovic - a politician, writer, and lawyer - who came to international prominence during the country's bitter 1992-1995 war - is remembered every year on his birthday at Kovaci Martyrdom in the capital Sarajevo with prayers.

Often dubbed the "Wise King", Izetbegovic managed to gain independence for his country on March 1, 1992 - months after Slovenia and Croatia broke away from the former Yugoslavia.

Izetbegovic died in Sarajevo on Oct. 19, 2003 of natural causes, having served as president of the Republic of Bosnia-Herzegovina from 1992 to 1996 and as chairman of the Bosnian presidency until October 2000.