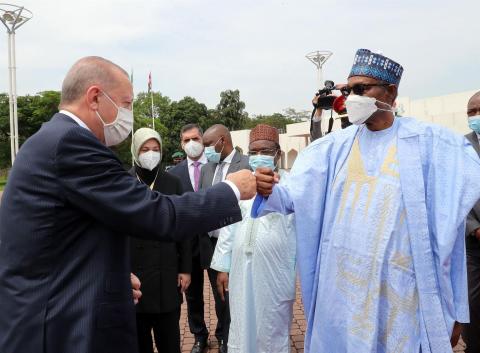 Erdoğan and Nigerian President Muhammadu Buhari signed seven agreements during a four-day tour of the Turkish president to three African countries, including Angola, Togo and Nigeria.

"We discussed Turkey-Nigeria relations from all aspects. We are determined to deepen our cooperation," the Turkish president said in a joint press conference, noting that his visit to the country after five years will take the relations to the next level.

Turkey is ready to share its capabilities in the defense industry and security fields, which are "appreciated worldwide," with Nigeria, Erdoğan said.

Expressing Turkey's expectation for cooperation fight against terror, Erdoğan said Ankara continues to share necessary information with the Nigerian authorities about the activities of FETÖ in Nigeria.

Buhari said they signed agreements in the fields of energy, defense industry, mining and hydrocarbons and expressed his will to implement these deals as soon as possible.

Turkey highly appreciates Togo's support in the fight against the FETÖ, the group behind the 2016 defeated coup in Turkey, Erdoğan said on Oct. 19.

Speaking at a joint news conference with his Togolese counterpart, Faure Gnassingbé, in the capital Lome, Erdoğan said that steps could be taken in military security cooperation so that terrorism does not infiltrate the West African region.

"We will always continue to stand by Togo in this regard," he added.

"We want friendly countries to be cleansed of the scourge of...