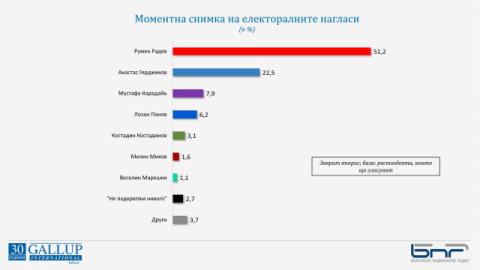 The data are from a Gallup International Balkan survey for the Bulgarian National Radio, conducted face to face with tablets, among 1,009 adult Bulgarians, in the period October 10-17. It does not take into account the events of recent days.

Among the other candidates for head of state stand out Kostadin Kostadinov - 3.1%, Milen Mihov - 1.6%, Veselin Mareshki - 1.1%. 2.7% would vote with "I do not support anyone". The rest are distributed among other candidates, including Volen Siderov, Valeri Simeonov and others.

56.4% say they will vote for sure in the presidential election. 54.2% say they will definitely vote in the parliamentary elections. More than 20% are those who say they would probably vote, but are not sure.

Data on the structure of attitudes and potential activity show the possibility of the presidential election ending in a single round. However, in view of recent events, this possibility is not dominant, sociologists say.