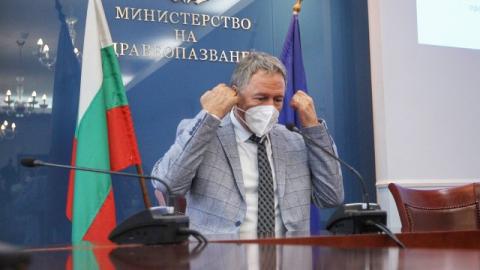 On the first day of entry into force the requirement to access a number of sites only with the so-called "green certificate", there are already changes.

Although yesterday it was said by the health authorities that the certificate of illness retains its term of 6 months, today it turns out that the experts have other opinions. Thus, by the end of the day, changes are expected in the order of the Minister of Health Stoycho Katsarov, with which the term is one year.

The next decision, which will become a fact, is also a compromise.

"Most people turned to the vaccine, which is given once - Jansen." This is an administratively provoked choice, not that they prefer this vaccine," Katsarov said.

The health authorities have decided to correct this and to issue a document to those vaccinated with one dose of the two-dose vaccines of Pfizer and Moderna (interest in AstraZeneca is almost zero). It will provide them with unimpeded access as with a green certificate, which they will receive after the second dose.

"This is a practice that is applied in many countries. It is not a Bulgarian innovation, an approach," Katsarov said.

Both changes will be valid only on the territory of Bulgaria.

He also specified how the term "green certificate" is used - colloquially and summarizes all documents, not only the one for vaccination. (Prof. Radka Argirova indirectly refuted here earlier on Wednesday morning.)

Regarding certificates for illness certified by an antigen test, Katsarov explained that they will be able to be issued by the system from Friday or Monday at the latest. (Again, this is a Bulgarian practice that is not generally accepted in the EU).

The Minister also gave explanations to the words...