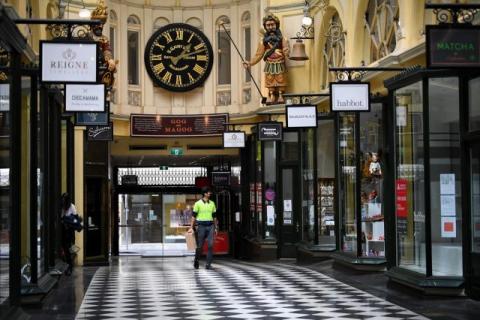 Pubs, restaurants and cafes are in a hurry to stock up before they open their doors.
Since early August, residents of Australia's second-largest city have been in isolation - their sixth lockdown during a pandemic - to quell an epidemic fueled by the highly contagious Delta strain.
Officials have promised to lift the ban after double-dose vaccination for people over the age of 16 exceeded 70 percent in the state of Victoria, whose capital is Melbourne.
Prime Minister Scott Morrison confirmed on Thursday that the state had achieved that goal, so there were places where the vaccination level reached 80 and 90 percent. From 23:59 (13:59 GMT), pubs and cafes can have 20 visitors - who have been vaccinated twice - indoors and 50 outdoors, while hairdressers can allow entry for five customers.
Masks will still be mandatory both indoors and outdoors.
As companies prepare to welcome customers, daily infections in Victoria rose to 2.232 on Thursday, the second highest daily number in any Australian state during a pandemic.