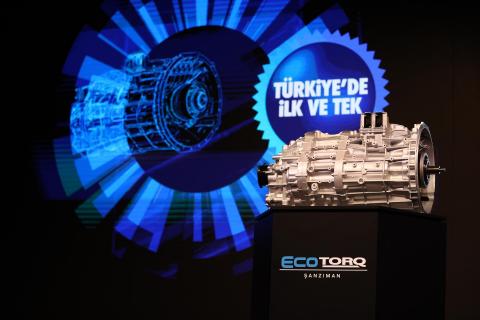 Ford Otosan, a joint venture of Turkey's Koç Holding and U.S. automotive giant Ford, has unveiled Turkey's first domestically-developed gearbox at its plant in the Central Anatolian province of Eskişehir.

Works to produce the transmission system called Ecotorq started in 2018 with research and development (R&D) support from the Scientific and Technological Research Council of Turkey (TÜBİTAK) and some 230 engineers took part in the project, according to a company statement.

"With the domestically-produced gearbox that we have carried out through an investment of 58 million euros [$67.5 million], we have increased the home-production rate of our vehicles from 74 percent to around 90 percent, making a huge contribution to our brand's and our country's competitiveness on the global arena," Ford Otosan CEO Haydar Yenigün said during a ceremony held on Oct. 19.

"Despite the pandemic affecting the world entirely, we have been organizing and expanding in Europe's primary markets with Ford Trucks," he added.

Initially, Ecotorq will be integrated into heavy commercial vehicles that are produced and sold under the brand Ford Trucks, according to Yenigün's remark.

They are also open to selling Ecotorq to other automotive brands, he also said.

Ford Otosan, which was founded 60 years ago, is the sole Turkish company capable of designing, developing and testing a vehicle from beginning to end, Yenigün said.

Ali Yıldırım Koç, the chair of Ford Otosan and the vice-chair of Koç Holding's board of directors, said at the ceremony that the company, which carries out nearly a quarter of Turkey's automotive production on its own, has also been the country's top exporter for the last six years.

"We have been exporting heavy...