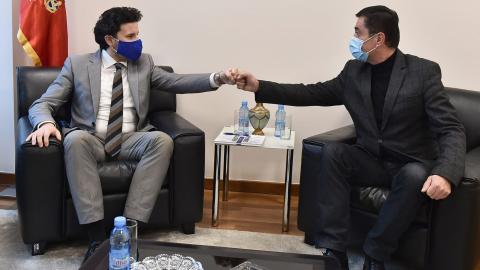 Special State Prosecutor Milivoje Katnic said Perunicic is suspected of abuse of office, after conforming that an illegal surveillance bug was found in his office.

"One surveillance bug was found in my office, and we will determine to whom the recorded materials were forwarded. It is suspected that the recording was ordered by the National Security Agency, but it is not yet known who the consumer of these materials was," Katnic told a press conference.

"Prosecutors will question Perunicic within deadlines. In this case, we had the help of the agency's new management and I encourage them to continue investigations," Katnic added.

Perunicic was appointed head of the ANB in 2015, by the government then led by the Democratic Party of Socialists, DPS. He was dismissed on December 17 by the new government formed by three opposition blocs that ousted the DPS in elections last August.

The former chief of the agency has already faced trial for the illegal surveillance of former opposition leaders, church leaders and journalists.

The ANB has long been accused of having links with criminal structures, and of acting under the political influence of the former ruling DPS.

Perunicic was arrested the day after the public broadcaster published a video of a former high-ranking agency officer Luka Bulatovic's suicide note, in which he said: "Lives could be saved if he knew some things".

Bulatovic was found dead on October 15 in his apartment in Podgorica. Katnic said he left two notes, one to his family and the other to the Special State Prosecutor.

Bulatovic had worked for the ANB for 30...