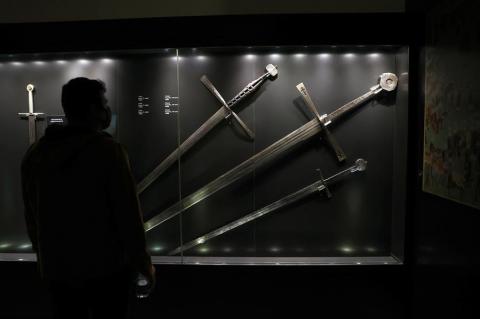 A group of restorers take care of historical weapons kept in the Inner Treasure building of Topkapı Palace, a marvel that has been home to the Ottoman dynasty for more than 400 years in Istanbul.
The building is one of the most visited places in the palace after the "Sacred Relics" section. The diversity, historical quality, function and aesthetics of weapons play an important role in this interest.
Covering a wide period of 1,300 years belonging to Turkish, Umayyad, Abbasid, Mamluk, Iran, Crimean-Tatar, Indian, European and Japanese cultures, the richest part of the collection consists of the weapons belonging to the Ottoman Empire.
In addition to the weapons of some Ottoman sultans and high-ranking statesmen, the collection includes much older items captured in the treasury of the rulers of the conquered regions or sent to the sultans as diplomatic gifts.
One of the earliest examples of the collection is the seventh-century sword of Mu'awiya bin Abu Sufyan, first caliph of the Umayyad Caliphate. Moreover, the 700-year-old swords of the Abbasid caliphs and Mamluk sultans are among the other early examples of the collection.
The collection includes more than 33,000 weapons with functions such as cutting, piercing, shooting, striking, crushing and firearms used during attacks on the battlefield and helmets, armor, shields and horse armors used in defenses.
The works that make up the collection, together with the mastery of the construction technique, are considered as a rich treasure that allow visitors to see the style unique to the region where they were produced in terms of decoration features.
The patterns and motifs used in the decoration draw attention to the fact that each weapon has been transformed into a rare work of art, not...