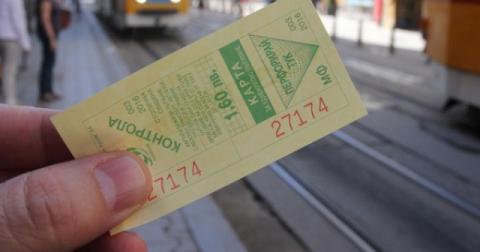 The ticket for public transport in Sofia priced at BGN 1.60 will be available in the duration of 30 and 60 minutes.

The new tariff policy for public transport in the capital is being prepared by the Municipal Council.

It envisages the current ticket of BGN 1.60 to be removed by the end of the year. The new ticket will be valid for 30 minutes - again at the same price and for 60 minutes - at a higher price. It will be combined and within the allotted time with it citizens will be able to get on a tram, trolley, bus or subway, announced Stolica.bg

Municipal councilors have rejected the option of making the ticket price more expensive according to the distance traveled.

"By the end of the year, maybe even in November, the new time ticket will appear and the current one will disappear," said Zafir Zarkov, chairman of the committee drafting the new public transport tariff policy in Sofia. "Thus, with one ticket, the passenger will be able to transfer from a tram to the subway within 30 minutes. However, for longer routes, a ticket with a validity of 60 minutes and a higher price is provided."

"I expect the public discussion to be held by the end of the year, so that the opinion of Sofia residents can be heard. The introduction of the ticket goes through changes in the ordinance (on the terms and conditions for travel in public transport)," said Alyosha Dakov.

Sofia residents lose from the delay of the combined ticket. Namely, it is aimed at them because it is profitable and the goal is to make them get out of the cars, Simeon Stavrev, a member of the transport commission, is convinced. According to him, the application of this ticket is deliberately delayed because it will be attractive to citizens...