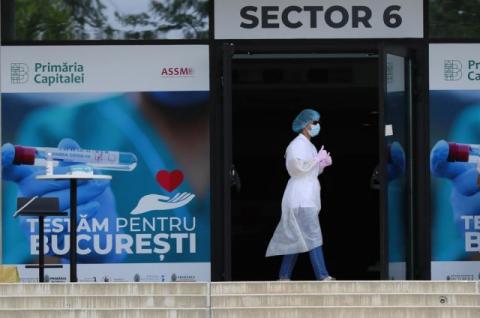 This is due to widespread skepticism about vaccines, but also the inability of the president and government to convince the people of the need for vaccination.
The video from the University Clinic in the Romanian capital, Bucharest, is hard to bear.
There are no free beds in the Intensive Care Unit, the hallways are crowded with waiting patients, the medical staff is driving the dead people in black plastic bags. Ambulances are constantly bringing in new patients.
Almost all are old people, mostly those who have not been vaccinated against coronavirus. Many can barely breathe, and some say they would not be vaccinated despite everything. One doctor commented: "This influx of patients has to do with people's negligence and lack of information. Politicians need to be much more persistent. If they are concerned about the welfare of voters, they should be constantly told to go and get vaccinated. Videos from the University Clinic in Bucharest left us speechless and lasts 16 minutes. They are entitled: "This is what a health catastrophe looks like."
The Romanian internet portal "Recorder" published it last week.

What was shown in the video at one clinic is currently happening in hospitals all over Romania. That country is facing one of the worst coronavirus waves in Europe.
New records are set almost every day. On Tuesday (October 19), it was announced that almost 19.000 newly infected had been recorded in the previous 24 hours and that 574 people had died.
"We are not only in a pandemic, we are in a catastrophe," the president of the Romanian Medical College (CMR), Daniel Coriu, said on Tuesday. Last week, they wrote an open letter entitled "Scream of Despair" in...