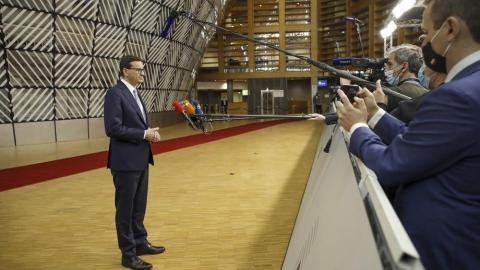 The heightened tension between Brussels and Warsaw followed the Polish Constitutional Tribunal's ruling on October 7 that key articles of EU Treaties were incompatible with the Polish constitution.

Legal experts say the ruling indicates the Law and Justice (PiS) government, which has illegally stuffed the Constitutional Tribunal with its allies, wants to be able to pick and choose which rulings by the Court of Justice of the European Union (CJEU), the ultimate judicial authority in the EU, it adheres to. In particular, the Polish government appears disinclined to implement those rulings that would prevent it from finalising its 'reforms' of the justice system, which many critics say amounts to establishing full political control over it.

The issue threatens to destroy the EU legal order from within by removing the "efficient legal protection" for companies and citizens that is enshrined in Article 19 of the Treaty on European Union and dethroning the ultimate arbiter - the CJEU - of assessing whether this fundamental principle is respected by and in EU member states.

In a debate in the European Parliament on Tuesday, Polish Prime Minister Mateusz Morawiecki argued that member states should be able to organise their justice systems in whichever way they see fit, and accused EU institutions of wanting to create a European "superstate" without the consent of national capitals.

"If you want to make a non-national superstate out of Europe, first get the consent of all the European states and societies," Morawiecki told MEPs.

In response, Ursula von der Leyen, president of the European Commission, argued that the Polish Constitutional Tribunal ruling was undermining core European values. "The people of Poland wanted democracy," she...