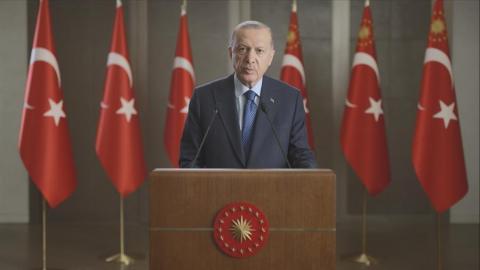 The social media platforms with no inspection executed now threaten the democracy, social peace and national security of states, the Turkish president said on Oct. 22.

"Just as we do not entirely rely on foreigners in defense industry and military matters, we cannot leave the communication issue to others," Recep Tayyip Erdoğan said in a video message to the Turkic Council Media Forum held in Istanbul.

Erdoğan expressed hope for the three-day media forum, hosted by Turkey's Directorate of Communications, to be instrumental in strengthening the solidarity among countries.

He stated that millions of "defenseless" people around the world are depressed due to false and distorted news, suffering serious trauma.

"Like other strategic issues, we have to take matters regarding media and communication into our own hands," Erdoğan said.

Cooperation opportunities in media, TV series and film sectors in the Turkic world as well as social media and the joint struggle against disinformation are among the topics that will be discussed during the forum.

The Turkic Council was established in 2009 as an intergovernmental organization with an overarching aim of promoting comprehensive cooperation among Turkic-speaking states. It consists of Azerbaijan, Kazakhstan, Kyrgyzstan,

Turkey, and Uzbekistan as member countries and Hungary as an observer state.

Bulgaria: Investing in Staff Is Key to Success in Tourism Business