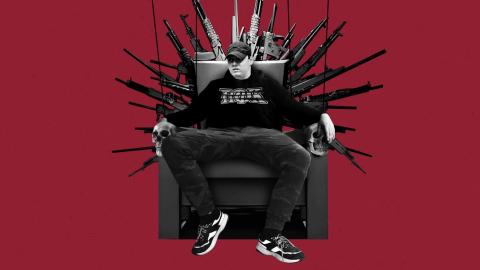 Long notorious for his violent behaviour, Belivuk nevertheless spent relatively little time behind bars, a fact some have ascribed to the documented connections between his crime gang and state officials of the ruling Serbian Progressive Party, SNS.

At the beginning of this year, Belivuk appears to have fallen out of favour.

The revelations that have since emerged paint a damning picture of the power and brutality of organised crime in Serbia, power laid bare on October 15 by the arrest of a former senior interior ministry official suspected of tampering with evidence in a murder for which Belivuk was charged and acquitted.

An indictment filed at the end of July makes for gruesome reading, but is quiet on the political links and protection Belivuk and his associates appear to have enjoyed for years.

A row of Partizan supporters, including members of Belivuk's group, celebrate their team's victory on the south terrace of Partizan stadium in May 2017. Photo: BIRN

Aged 36, Belivuk grew up in the Belgrade of the 1990s, when socialist Yugoslavia was unravelling in war and Serbia was in the grip of nationalism. In Belgrade, gun-toting crime figures were tabloid heroes.

In the early 2000s, as reformers struggled to get to grips with the legacy of Slobodan Milosevic's disastrous rule, Belivuk entered the flourishing world of private security, joining a firm owned by the Serbian 'ultimate fighter' Dusan Panajotovic.

His first known brush with the law came in 2007, when, as head of security at BlayWatch, a well-known river nightclub in Belgrade, Belivuk was involved in a violent incident with two minors.

In 2008, prosecutors accused him of aggravated attempted murder and...