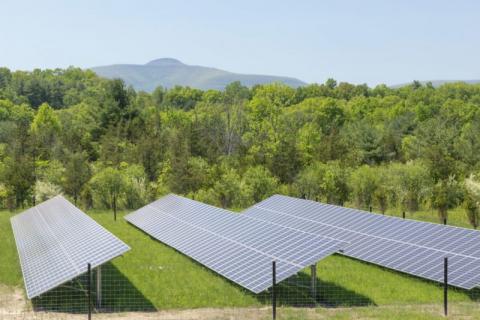 Brussels – In the energy crisis, green transition should be seen as a solution, not a problem, Prime Minister Janez Janša said as he addressed the press after a two-day EU summit in Brussels on Friday. He again urged the use of nuclear energy in the transition to a fossil-free future.

Calculations show transition will be impossible to make without nuclear energy, because it accounts for 27% of Europe’s electricity and even a bit more in Slovenia.

If it is excluded, the only other transition energy source is natural gas, in which case the EU would agree to being strongly dependant on external factors, he said.

“It’s completely clear that the share of renewables in the EU’s energy total in the medium-term could not do for the loss of fossil fuels without nuclear energy.”

This awareness somehow prevailed although some countries opposed mentioning nuclear energy in this process due to political reasons, while they use energy produced by European nuclear power stations, Janša said.

He sees progress in the European Commission’s explicitly mentioning nuclear energy as a transition source when presenting a set of measures to deal with the rising energy prices last week.

The debate on how the EU should respond to the growing energy prices is, according to Janša, the continuation of an old debate on how much its commitment to climate goals affects the prices.

It is clear this is not the main reason for the prices to grow, he said, adding this was a typical case of the global economy balancing when the consequences of the pandemic are being addressed by printing money, which automatically causes more demand. He said the rise in the prices of CO2 coupons contributed some 20% to the energy price hike.

The prime minister believes that the EU will never achieve strategic autonomy if it does not do away with its strategic energy dependency.

In this respect he pointed to the role of innovation, for instance to develop new batteries for electric cars since there is not enough lithium in the world.

He also noted that in 2021 the EU was dealing with similar problems as in 2008 during Slovenia’s first EU presidency.

Everyone hopes the EU has learnt from the financial crisis that followed to now act differently so that skyrocketing energy prices do not hinder post-pandemic recovery significantly, Janša said, adding he expected an ever deeper debate on the topic at the December summit.

A debate on migrations was also high on the agenda, with some countries urging the EU to finance fences on the bloc’s external borders. But Commission President Ursula von der Leyen said the EU would not finance wire and walls on its borders.

Janša, answering a journalist’s question, said the decision for the EU to co-finance fences had not been taken today but “in a formal act in June”.

“The act says Europe will also ensure funds for infrastructure for the protection of the external borders. But there are different interpretations as to what this infrastructure is,” he said.

EU leaders are starting to gradually realize the bloc will be able to address the migration problem “primarily by protecting its borders, both the external and Schengen borders, and that the two will have to be equalized sooner or later”, Janša said.

“At the moment three countries are waiting to join the Schengen zone, they have met all technical requirements and shoulder a great deal of responsibility for a safe Europe yet are not yet formally in the Schengen area.

“Slovenia has a Schengen border but it does not have an external EU border, and we wish for this border to move as soon as possible to the border between Croatia and Bosnia-Herzegovina.” Slovenia is also willing to help protect this border, and protect it more than proportionally, Janša explained.

The post Janša: Green transition in energy crisis should be seen as solution appeared first on Slovenia Times.