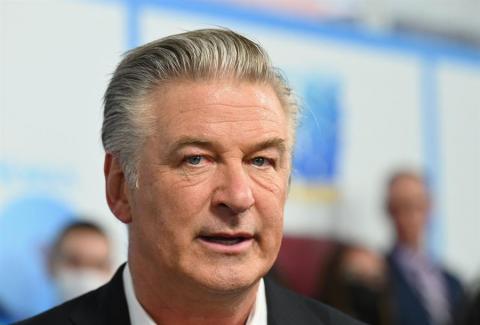 U.S. actor Alec Baldwin fired a prop gun that killed a cinematographer and wounded the director on a film set in New Mexico, US law enforcement officers said on Oct. 21.

The incident happened on the set of "Rust" in the southwestern U.S. state, where Baldwin is playing the lead in a 19th-century western.

Halyna Hutchins and Joel Souza "were shot when a prop firearm was discharged by Alec Baldwin," the sheriff in Santa Fe said in a statement.

Hutchins, 42, was transported to hospital by helicopter but died of her wounds, while Souza, 48, was taken by ambulance and is receiving treatment.

"He provided statements and answered their questions. He came in voluntarily and he left the building after he finished his interviews. No charges have been filed and no arrests have been made."
The Santa Fe New Mexican published pictures of a distraught-looking Baldwin which it said were taken in the parking lot of the set after the tragedy.

The paper said its reporter had seen the actor in tears after he had been quizzed by investigators.
One photograph shows a man, presumed to be Baldwin, doubled over.
A spokesperson from the production told The Hollywood Reporter the "accident" involved the misfire of a prop gun with blanks.

The incident took place at the Bonanza Creek Ranch, a production location near Santa Fe which is popular with Hollywood filmmakers.
Movie sets usually have stringent rules over the use of prop weapons, but accidents have happened.
Most famously, Brandon Lee, the son of martial arts legend Bruce Lee, died during filming of "The Crow" after being shot by a gun that was supposed to fire blanks.<...