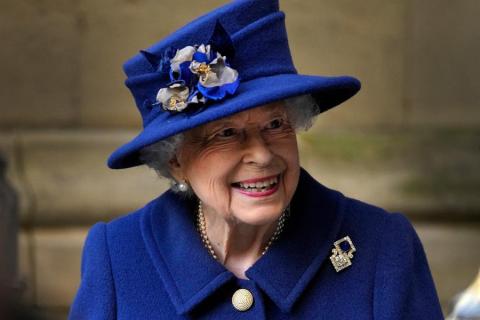 Queen Elizabeth II spent a night in hospital for tests after being forced to cancel a visit to Northern Ireland this week, Buckingham Palace said on Oct. 21.

"Following medical advice to rest for a few days, The Queen attended hospital on Wednesday afternoon for some preliminary investigations, returning to Windsor Castle at lunchtime today (Thursday), and remains in good spirits," a statement said.

Britain's domestic Press Association news agency said the trip to hospital had been kept under wraps because it was expected to be a short stay, and also to protect the 95-year-old monarch's privacy.
The overnight stay was for "practical reasons", it added.
The palace made the announcement after The Sun newspaper broke the news.
The tabloid said it was decided she should stay at the private King Edward VII's Hospital in central London because it was too late to make the 26-mile (42-kilometre) trip back to Windsor.

She has previously been treated at the exclusive clinic, which is known for treating the royal family, including in 2013 for gastroenteritis, when she also stayed for one night.
In 2003, surgeons at the hospital removed minor non-cancerous growths from her face and operated on her knee, while in 1982 had a wisdom tooth extracted.

The Queen's late husband, Prince Philip, spent four weeks from February this year for treatment for a pre-existing heart condition. He died in April, just a few weeks before his 100th birthday.
The head of state, who has been on the throne since 1952 and is Britain's longest-serving monarch, was said to be back at her desk on Thursday afternoon, undertaking light duties.

She had been due to attend an ecumenical service in the border town of Armagh on Thursday to mark the...