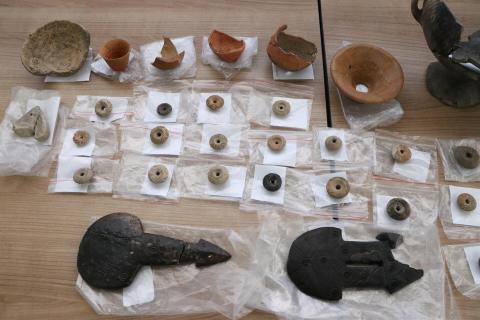 A 20-million-year-old fossil, believed to belong to a sea creature, has been unearthed during the excavations in the ancient city of Tyana, located in the Kemerhisar district of the central Anatolian province of Niğde.

Osman Doğanay, the head of the excavations and lecturer at Aksaray University's Archaeology Department, said Tyana was the most important city in the Cappadocia region.

Stating that it is known from written documents that the city had been inhabited continuously for at least 4,000 years, Doğanay said there were many remains of the Bronze and Iron Age, Hittites, Hellenistic, Roman, Byzantine, Seljuk and Ottoman civilizations in the city.

Stating that they started drilling works in the south to reach the early period findings of the city, Doğanay said: "We have reached a depth of 4 meters in the excavations that have been going on for two months. We reached the early phase of the Bronze Age and artifacts from that period. We will reach information and documents that the history of the city dates back to the Chalcolithic or even Neolithic era. We will prove with archaeological documents that the settlement in Tyana dates back at least 5,000-6,000 years."

He said they reached nearly 200 museum-worthy artifacts in single drilling, adding, "Pottery and idols were expected finds in the excavations, but we found fossils of sea creatures in the layer belonging to the earliest phase of the Bronze Age. We identified that the fossil is a 'nummulites' type shellfish dating back 20 million years. We also found small round discs in the same layer. We guess that these discs were also used as a means of payment together with the fossil because there are similar examples in Egypt. Therefore, we think that besides ingot [a flat copper plate...