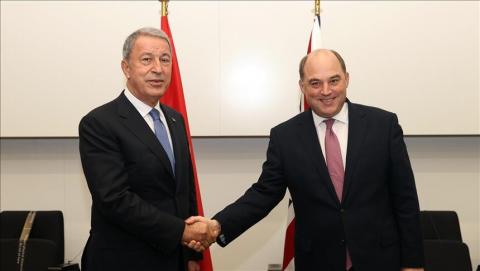 Separately, Akar and US Secretary of Defense Lloyd James Austin held a short meeting before a larger gathering of their counterparts.

Akar and Austin discussed the need to hold a detailed meeting on establishing a positive agenda before the two-day G20 leaders' summit this weekend in Rome.

During the bilateral meeting, they discussed defense and security issues and Akar invited a delegation from Greece to Turkey's capital Ankara for a fourth meeting to be held as part of confidence-building efforts between the two countries.

Akar also met with Spanish Defense Minister Margarita Robles and discussed preparations about cooperation on security and the defense industry ahead of the seventh Intergovernmental Summit between Turkey and Spain.

The defense chiefs are currently in Brussels to attend a two-day meeting of their NATO counterparts.