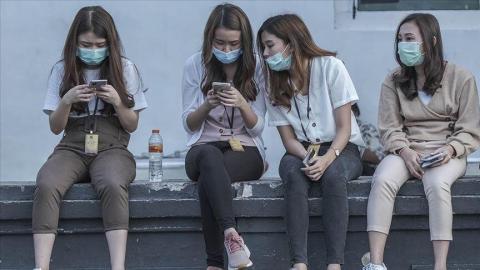 Young people are appearing to be the main culprit for the spread of COVID-19 recently, Health Minister Fahrettin Koca has said, noting that, however, most of the patients who are treated for the coronavirus in intensive care units are the elderly and those with chronic diseases.

"The average age of the infected people has declined. Nearly half of the new cases are made up of people under the age of 30," Koca wrote on Twitter, reiterating that despite the current state of the pandemic hospitals are not yet overwhelmed.

The virus will continue to spread until herd immunity is reached and the current level of the vaccination rate is not providing security for the unvaccinated, the minister said.

The number of daily cases, which climbed to record highs at above 60,000 in April, are currently hovering around 30,000, with the daily death toll from the pandemic around 200.

Since March last year, COVID-19 has infected nearly 8 million people and killed close to 69,000 patients.
In a series of tweets, Koca also remined that a number of people need to get their second and third doses of the COVID-19 vaccine as soon as possible

The minister recently revealed that only 54 percent of the country's youth, aged between 18 and 25, are fully vaccinated and some 5 million people have skipped their third dose of the shot.

Turkey encourages those who have already received two doses of the inactivated jab, developed by the Chinese firm Sinovac, to receive the booster shot.

The country is using both the Sinovac and Pfizer/BioNTech's mRNA vaccines in its inoculation drive, which was launched in January.

The booster shot of the vaccine developed by Pfizer/BioNTech is 95.6 percent effective against symptomatic infection,...