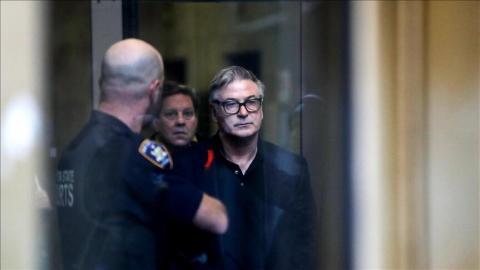 Actor Alec Baldwin released a statement on Oct. 22 expressing his shock after a prop gun he was holding apparently discharged, leaving a movie cinematographer dead and the director injured.

"There are no words to convey my shock and sadness regarding the tragic accident that took the life of Halyna Hutchins, a wife, mother and deeply admired colleague of ours," the 63-year-old Baldwin said in a tweet. "My heart is broken for her husband, their son and all who knew and loved Halyna."

The 42-year-old Hutchins was the cinematographer for the movie "Rust", being filmed in a rural part of the US state of New Mexico. The movie's director, 48-year-old Joel Souza, was also injured, but it was not clear about the nature of his injuries and he was treated and released from a New Mexico hospital later on Thursday.

Baldwin added that is "fully cooperating" with the police investigation into what appears to be an accident.

Photos from the set show a distraught-looking Baldwin talking on his mobile phone after the shooting.

It has been widely reported that Baldwin may have not known he was holding a "hot" prop gun - one that had metal projectiles inside - when he fired it.

The Santa Fe County Sheriff's Department released a statement saying "Detectives are investigating how and what type of projectile (in the prop gun) was discharged."

Production on the set has been halted, at least temporarily, and a spokesperson for the movie production company released a statement saying "The entire cast and crew has been absolutely devastated by today's tragedy and we send our deepest condolences to Halyna's family and loved ones."

The shooting revived memories of the death of actor Brandon Lee, the son of Bruce Lee, who was killed by...