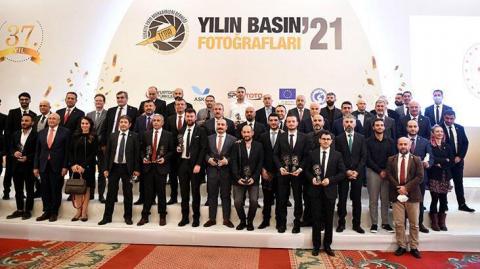 Photojournalists from Demirören Media have won 11 awards in the Press Photographs of the Year Event, one of the most well-established photography organizations held by Turkey's Photojournalists Association (TFMD).

Some 5,188 photographs that marked the events in 2020 participated in a photography contest held to support photojournalists, and 28 photographs and seven photography series were awarded in seven categories.

Selahattin Sönmez, Mert Gökhan Koç and Selçuk Şamiloğlu, three Ankara-based photojournalists of daily Hürriyet, won a total of six awards in the prominent competition which has been held for 36 years.

Koç, who won the European Union Migration Special Award, was presented with his award by Ambassador Nikolaus Meyer-Landrut, the head of the EU delegation to Turkey.

Ozan Güzelce and Ünal Çam from daily Milliyet, Can Erok and Serhat Ozan Yıldırım from Demirören News Agency (DHA), and Murat Akbaş from daily Fanatik also were the winners of prizes.

Rıza Özel, the chairman of TFMD, stated that photojournalists write "visual history" both in the country and internationally.