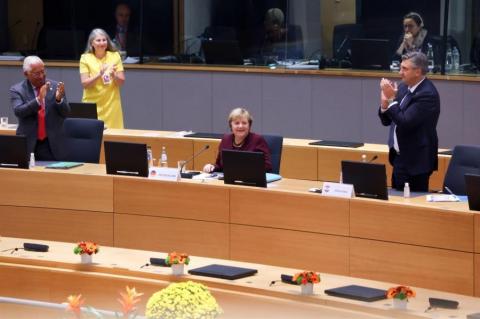 European leaders gave German Chancellor Angela Merkel a standing ovation on Oct. 22 at her last EU summit after a 16-year reign that helped guide the bloc through major ups and downs.

Merkel has attended a staggering 107 EU summits that saw some of the biggest twists in recent European history, including the eurozone debt crisis, an inflow of Syrian refugees, Brexit and the creation of the bloc's landmark pandemic recovery fund.

"You are a monument," the host of the summits, European Council chief Charles Michel, said in the closed-door homage to her, according to an official in the room.
An EU summit "without Angela is like Rome without the Vatican or Paris without the Eiffel tower", Michel said.
He handed Merkel a perspex cube with a globe described as an "artistic impression" of the Europa building where EU summits are hosted.

Merkel, with characteristic lack of fanfare, thanked journalists for their long nights at summits, though she offered a strong word of caution on the challenges still facing the EU, and her German successor.
"I am leaving the European Union, as far as my responsibility of Federal Chancellor is concerned, at a point in time where there is cause for concern," she said.
"We have overcome many crises but we have a series of unresolved problems," she said, citing disputes on migration, the bloc's economy, and rule of law in EU countries.

Luxembourg's Prime Minister Xavier Bettel called Merkel a "compromise machine" who "usually did find something to unite us" through marathon intra-EU negotiations.
"Europe will miss her," he said.
Austrian Chancellor Alexander Schallenberg called her "undoubtedly a great European" and "a haven of peace, if you like, within the European Union".

German message to Serbia: You will have to

The EU will Block Putin and Lavrov's Bank Accounts

Eurostat: Bulgaria with the Biggest Jump in Greenhouse Gas Emissions in the EU