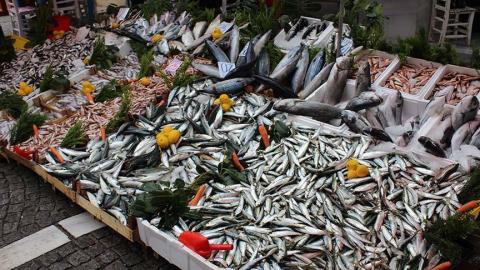 Fish caught in Turkey's Marmara Sea can be consumed without any doubt unless it's raw, a senior official has said, amid public worry that the fish weren't edible due to marine mucilage, a jelly-like layer of slime that invaded the sea this summer.

Mustafa Altuğ Atalay, the general manager of the Agriculture and Forestry Ministry's Fisheries Department, said that fish analyses were made every day in seven provinces that have a coast on the Marmara Sea and no data could be reached that would prevent consumption due to mucilage.

People can consume fish without any doubts, Atalay said on Oct. 21 at the mucilage investigation commission established in the Turkish Parliament.

Marine mucilage has disappeared from the surface of the Marmara Sea, but some scientists recently claimed that the sea snot has reduced the nutritional quality and meat of the fish caught in the sea.
Voicing more optimism than scientists, Atalay said that some of them told the public about poisoning caused by heavy metals as though they were related to mucilage but added that the allegations were not true.
"No element was found that would put human health at risk. We will do what is necessary," Atalay said, stressing that he consumes fish without any hesitation.

"We detect heavy metals in some aquatic organisms. However, none of them are over the limit," he added.
Noting that it is necessary to cook the fish, the expert stressed that there is no problem as long as it is not raw, suggesting people not to make sushi and to consume mussels only on condition that they know where they were caught.

The thick and slimy substance made up of compounds released by marine organisms has surfaced in the Marmara Sea late May, alarming marine biologists,...