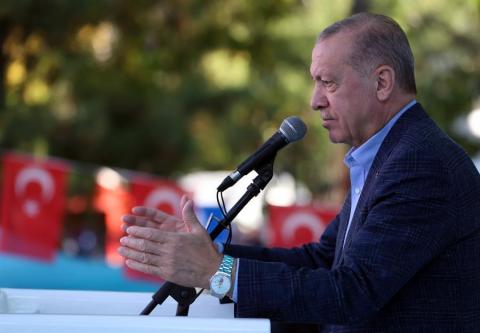 Turkey must declare the ambassadors of 10 Western nations, including the United States, France and Germany, as persona non grata after they issued a joint statement for the release of jailed activist and businessman Osman Kavala, President Recep Tayyip Erdoğan has said, vowing no nation can interfere in Turkey's affairs.

"I gave the necessary instruction to our foreign minister and said what must be done. 'These 10 ambassadors must be declared persona non grata at once. You shall sort it out immediately,' I told him. They must understand and know about Turkey; the day they don't, they will go," Erdoğan said during his visit to the northwestern province of Eskişehir on Oct 23.

"What kind of an indecency is this? Where do you think you are? This is Turkey. This is not a tribal state as you think," he stated.

Erdoğan's reaction was against the envoys of the U.S., Germany, France, Netherlands, Canada, New Zealand, Norway, Finland, Denmark and Sweden in Ankara who called on Turkey to urgently release Kavala in a social media statement on Oct. 18. These envoys were summoned to the Foreign Ministry on Oct. 19 and were protested for interfering in judicial matters.

Erdoğan described Kavala as the agent of American billionaire George Soros and slammed the envoys for going to the Foreign Ministry for his release. Kavala has been in prison since 2017 over terror-related charges and has not been convicted. The European Court of Human Rights (ECHR) urged Turkey to release Kavala as his fundamental rights and freedoms were breached.

US seeks clarity from Turkey

Several European countries said late Saturday they had received no official notification from Turkey. "We are currently in intensive consultation with the nine...