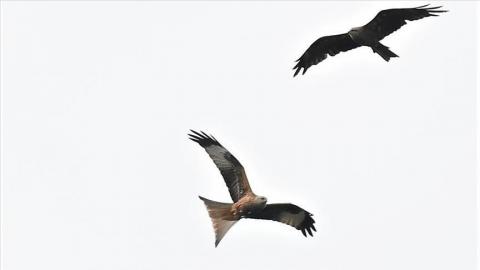 A red kite, a medium-sized bird of prey that is rare in Turkish, was spotted in Istanbul.

The bird from the accipitridae family, also known as the hawk or vulture family, was sighted by a birdwatcher near a solid waste disposal site in the Sile district.

Haldun Savaş told Anadolu Agency that he has been performing birdwatching for over 15 years despite his engineering profession.

"I observed black kite birds on the north side and snapped some photos. While capturing the photo, I wasn't paying attention to the red kite. When I got home in the evening and was going through my images, I came across some photos of the red kite and was ecstatic," he said.

Red kites are so rare that even during their migration time, spotting them is almost impossible, he asserted.

Mentioning that red kites have only been shot 10 times at most in Turkey so far, he stated that even his other colleagues in the field, who have hundreds of bird shots, have never seen one.

The red kite is a rare and endangered bird species that has only been observed a few times in different locations of the country in previous years.