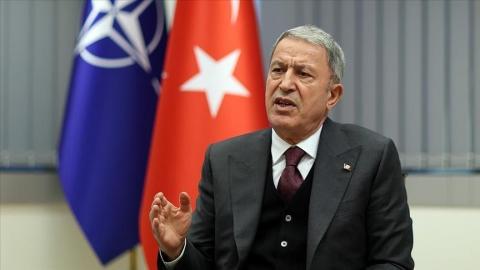 Turkey's defense minister said he had a "positive" meeting with his Greek counterpart in Brussels, on the sidelines of a gathering of their NATO colleagues.

"We had a positive and constructive meeting with the Greek defense minister (Nikos Panagiotopoulos)," Hulusi Akar told reporters late on Oct. 22.

"We expect to see the positive results of this meeting in the coming days."

He reiterated that provocative actions and rhetoric that ramp up tensions between the two nations "would not be beneficial."

On Greece's defense pact with France reached earlier this month, Akar said that since all three countries are members of NATO, such alliances threaten to "harm both NATO and bilateral relations and undermine trust."

In recent years Turkey and Greece have been at loggerheads on such issues as a fair demarcation of maritime boundaries and energy resources and Athens' militarization of Aegean islands in violation of longstanding treaties.

On Turkey's project to upgrade its F-16 jet fleet, Akar said that technical work has been started for both the supply of Block 70 Viper F-16s from the US and the modernization of some jets it already owns.

Saying that Turkey is on the alert for PKK/YPG terrorist attacks in northern Syria, near its southern border, Akar added that Turkey's presence in the area's Idlib region is "important."

"Our presence there prevents massacres by the (Assad) regime," he said. "Preventing this also stops a wave of migration and radicalization."

The Idlib de-escalation zone was forged under an agreement between Turkey and Russia. The area has been the subject of multiple...