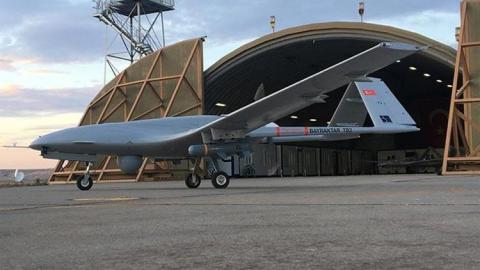 Kyrgyzstan's president said on Oct. 23 that his country will purchase unmanned aerial vehicles (UAV) from both Turkey and Russia.

"We're not buying drones to go to war with someone. We will buy drones to ensure the country's security," Sadyr Japarov said in his first annual press conference in the capital Bishkek, after assuming the post at the beginning of 2021.

Japarov confirmed the statement made by Gen. Kamchibek Tasiyev, chairman of the Kyrgyzstan National Security State Committee, that they have ordered Turkey's Bayraktar TB2 drones.

Mentioning an armed conflict along the border with Tajikistan this April, in which 36 people on the Kyrgyz side died, he said: "We didn't have even one aircraft to put into the air during the conflict. Now we will buy both aircraft and UAVs. We will meet these purchases from the budget."

He said that they have developed their relations with neighboring countries Kazakhstan and Uzbekistan after years of "cold" ties. He added that the country also has strengthened its relations with Russia and Turkey.

On the fight against corruption, the president said the state has reaped some $87.45 million.

On comments that Sooronbay Jeenbekov, his predecessor who stepped down in October 2020 as a result of protests, Caparov said there are no plans to annul his presidential status, and added: "The tradition of firing presidents should be ended."

On the idea of ​​establishing a new city in Kyrgyzstan's Issyk-Kul region, he said: "We will start the establishment of the city of Asman. At the moment, work on city planning is in progress."

Bulgaria: Investing in Staff Is Key to Success in Tourism Business