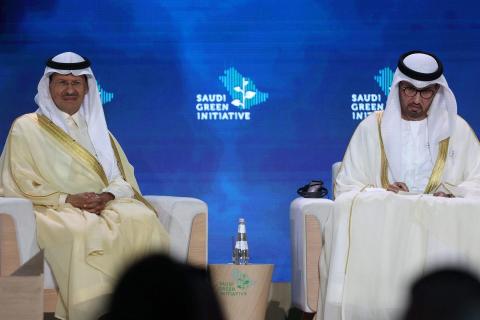 The kingdom, one of the world's biggest polluters, said it would also join a global effort to cut methane emissions by 30 percent by 2030.

The U.N. says more than 130 countries have set or are considering a target of reducing greenhouse gas emissions to net zero by 2050, an objective it says is "imperative" to safeguard a liveable climate.

"I am pleased to launch initiatives in the energy sector that will reduce carbon emissions by 278 million tonnes annually by 2030, thus voluntarily more than doubling the target announced," Prince Mohammed said.

"We also announce the kingdom's accession to the Global Methane Pledge."

A statement said Saudi Arabia would "contribute to cutting global methane emissions by 30 percent by 2030, as part of its commitment to deliver a cleaner, greener future".

The 2060 target would "enable us to have a smooth and viable transition, without risking economic or social impacts", Energy Minister Prince Abdulaziz bin Salman said.

"I hope this landmark announcement... will galvanize ambition from others ahead of #COP26," Sharma tweeted, adding he was looking forward to seeing more details on the Saudi plan.

Shortly after, energy giant Saudi Aramco said it committed to being a net zero enterprise by 2050.

"Saudi Aramco will achieve an ambition of being also a net zero from our operation by 2050,"...