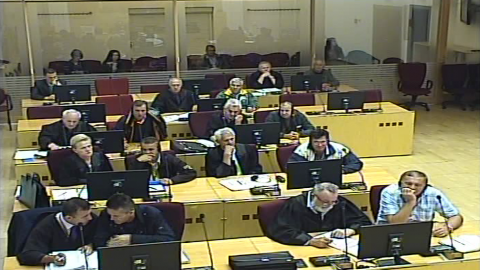 In closing arguments at the Bosnian state court in Sarajevo on Monday, defendant Vukasin Draskovic's lawyer asked for a verdict of acquittal, arguing that the prosecution did not prove beyond a reasonable doubt that his client was involved in an attack by Bosnian Serb forces on a column of Bosniaks in July 1992.

Lawyer Petko Pavlovic said that the prosecution did not manage to prove that Draskovic committed a crime against humanity, or that he was a member of the Lokanj Company of the Bosnian Serb Army's Zvornik Brigade, which was allegedly involved in the attack.

Draskovic is on trial, along with Mile Vujevic, Goran Maksimovic, Ljiljan Mitrovic, Slavko Peric, Gojko Stevanovic, Rajo Lazarevic and Mico Manojlovic, for the killing of at least 67 civilians after a column of fleeing Bosniaks that left Teocak on July 14, 1992 was attacked.

According to the charges, Maksimovic was commander and Mitrovic deputy commander of the police intervention unit in Ugljevic, Peric was the commander of the Lokanj Company of the Bosnian Serb Army's Zvornik Brigade, while the other defendants were memnbers of the company.

Defence lawyer Pavlovic tried to challenge the testimony of a prosecution witness who...